Only about 5 per cent of dengue patients face complications such as severe bleeding and thus will require transfusions. Findings from the study show that most patients with critically low platelet counts will recover by themselves after a few days. 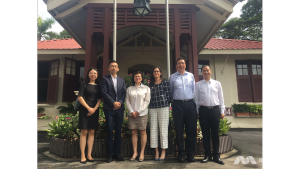 SINGAPORE: Dengue patients with critically low platelet counts do not require platelet transfusions to get better, as long they do not have other complications, a recent study found.

Only about 5 per cent of dengue patients face complications such as severe bleeding and require transfusions. Findings from the study show that most patients with critically low platelet counts will recover by themselves after a few days. There is no difference in clinical bleeding with or without transfusion in those with a platelet count of less than 20,000 per microlitre.

“The issue here is when the platelet count drops to a critically low level, most clinicians will feel unsafe not to do something,” said Professor Leo Yee Sin, director of the Institute of Infectious Diseases and Epidemiology at Tan Tock Seng Hospital. “In other words, most clinicians will go ahead to transfuse platelets to this group of uncomplicated patients and this study shows that it is not necessary to do so.”

A transfusion, just like any medical procedure, runs the risk of side effects like a severe allergic reaction, so researchers have said doctors should focus on supportive care.

For instance, dehydration is a key concern for dengue patients, so treatment could include fluid therapy.

Prof Leo said previous retrospective studies done in this area have sparked a shift in how doctors traditionally manage the virus. She hopes this study will further reduce hospital admissions.

A dengue patient will usually get one bag of pooled platelets during a transfusion. One bag will require contributions from four donors. Researchers hope the shift to supportive care will also free up supplies for those who need it – especially in the event of a dengue outbreak.
The World Health Organization has issued recommendations against transfusions since 2009, but Prof Leo said that until this study, there was no conclusive evidence against doing so.

The study was recently accepted by Lancet medical journal.

“More of the community doctors are getting more comfortable in taking care of patients in their own clinic setting without referring them to the hospital, without referring them for admission,” said Prof Leo. “I think this trend will continue to shift the focus of dengue care into primary care and leave the more complicated cases in tertiary care.”

Researchers will next look at the cost-effectiveness of transfusions and how resources that are freed up could be used in other ways. They hope to come up with results in a year.